Steven, a final year student studying Plants and Planting Design at the College’s Enfield campus, designed and presented the garden based on the catwalk, stage and dancefloor of a drag queen club. His design is a celebration of drag queens and their contribution to LGBTQ+ culture.

The design competition is based on an existing show garden at Capel Manor College with some of the existing plants and hard landscaping being retained. Now in its tenth year, the competition tasks students with a brief and budget to work with set by tutors and Provender Nurseries. Students were also instructed to introduce new plants that were not already featured in other parts of the College’s gardens.

Steven’s design was thought to be original, dynamic and an excellent representation of his aim to bolster the flamboyant characteristics of the existing planting. Steven’s design incorporates strong, structural elements throughout and much thought has been given to textures, contrast, colour, and forms in the new plant selection. Unity across the garden is provided by the repeated use of mounds and contrasting strap-like leaves. 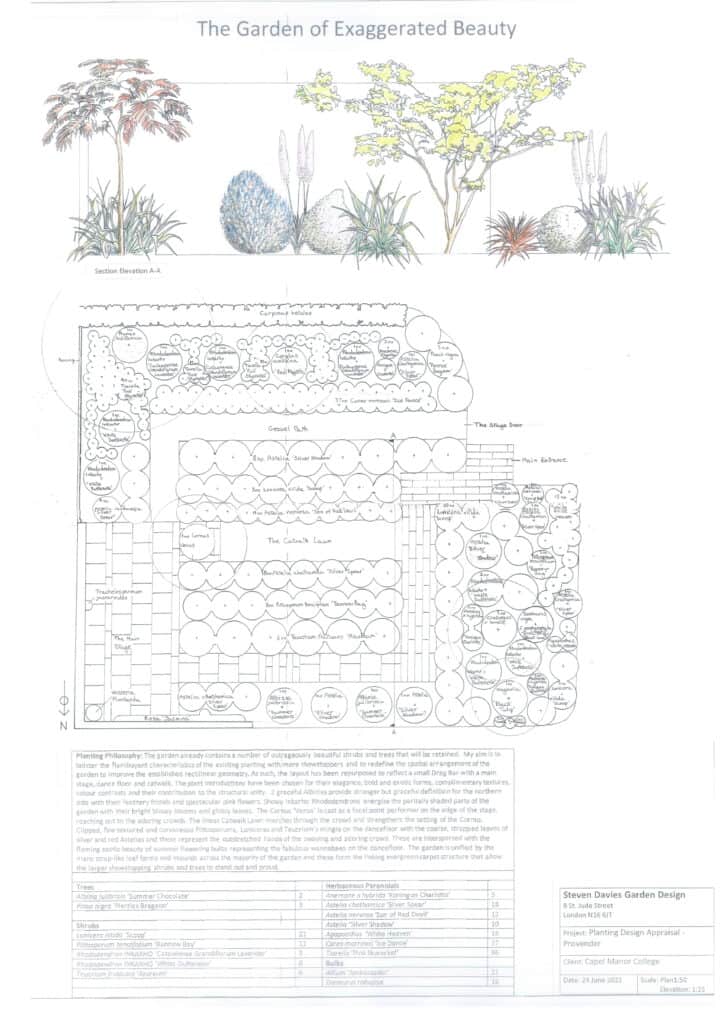 Steven was introduced to gardening as a child by his grandmother. The son of a carpenter, he also became interested in construction, helping his father by working on building sites during the summer holidays as a student. Steven gained a degree in town planning in the early 1980s, and took a gap year in New York City, where he could indulge his interest in architecture.

Once he returned to London, Steven began working as a Project Manager on urban regeneration schemes with the Royal Borough of Kensington and Chelsea. In the 1990s Steven wanted to specialise in urban design and went on to complete a Diploma at Oxford Brookes. Eventually Steven ended up working for the London Borough of Hammersmith and Fulham as a Projects Team Manager, and it was this role that refuelled his interest in gardens and landscapes as he worked closely with landscape architects, commissioning new landscaping schemes for public spaces and parks.

During this time, Steven also bought a house in Islington which he redesigned, and rebuilt with his father. Here, he worked closely with a gardening professional friend to create his first garden from scratch. This stoked his desire to retrain as a garden designer, but it would take one more house move and the creation of another garden before he felt able to wind down his career and retrain.

Chatting to one of the show garden designers at Hampton Court Festival in 2018 convinced Steven to retrain at Capel Manor College in Enfield, where he completed Garden Design (Level 2) in 2020 and Plants and Planting Design (Level 3) in 2021.

Steven says, ‘I now intend to set up a garden design business focusing on the typically small urban gardens where I cut my teeth. I like the challenge of maximising the amenity potential and flexibility of small gardens, whilst introducing beautiful planting that can boost the wildlife potential of the city.’

Steven’s Garden of Exaggerated Beauty will be planted in October 2021 by Capel Manor College students. Once complete the garden will be used as an educational resource for tutors to introduce new plant species and cultivars to those studying garden design.

In total, 13 designs were presented to the judging panel of Capel Manor College’s Nathalie Puget, Garden Design Curriculum Leader and Julie Dowbiggin, National Gardening Centre & Plant Sales Manager, and Liz Hughes, Marketing Manager of Provender Nurseries. The judges concluded that Steven’s presentation was very positive, with a strong concept that was put across enthusiastically and would provide a great conceptual garden.

‘This was not an easy task as our students had to incorporate existing trees and plants that are already in the garden. The standard was very high and every design was different, all of the students had put in a lot of hard work. The presentation given by Steve blew us away as his passion and enthusiasm for his design came across brilliantly. He had thought about the role of every plant in the garden, and his idea is very conceptual, and I am really looking forward to working with Steve in implementing his design into the garden this autumn. This garden will be very different to what we already have on site which will be great for students and visitors.’

Steven will also be awarded a cheque for £250 and the garden will be officially opened in April 2022 at Capel Manor College’s Spring Fair.